Buildings were due to be torn down under previous plan 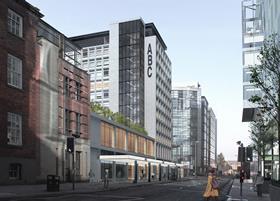 McLaren Construction will start work next month on a £16m scheme to refurbish a 1960s office complex in Manchester originally earmarked for the wrecking ball.

The buildings have been empty for 10 years but Altrincham firm Spacescape has been carrying out strip out work with the buildings due to be handed over in phases by February next year.

Architect Levitt Bernstein was appointed last year by Allied London to overhaul the complex which has been renamed the ABC Buildings.

The buildings (pictured) will be launched in late summer and form part of the developer’s St John’s regeneration scheme which includes a tech, media and creative industries hub called Enterprise City.

Allied London chief executive Michael Ingall said: “The ABC Buildings, once restored to their 60s ethos and enhanced with an advanced tech infrastructure, will make powerful additions to our Enterprise City vision”.

St John’s also includes the £112m Factory arts complex which the developer yesterday confirmed is set to be built by Laing O’Rourke.