Project will increase the capacity of London Gateway logistics hub

A Dubai-based logistics company has announced that it will begin work next month on a new fourth berth at its London Gateway logistics hub.

The £300m scheme, which is designed to increase supply chain resilience and create more capacity for the world’s largest vessels, comes on top of the £2bn DP World has ploughed into the UK over the past decade.

British ports have been under pressure from Brexit and coronavirus-fuelled stockpiling surges that have caused UK businesses to face vastly higher container shipping costs than normal. 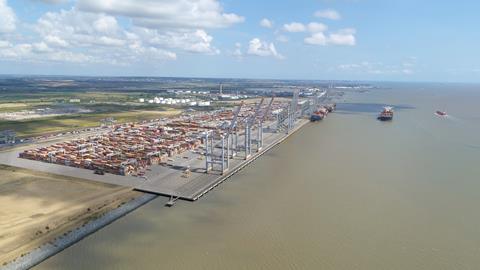 The scheme is part of the Thames Freeport

This has been one of the factors helping drive pressure on the construction materials crisis.

In the first six months of 2021 London Gateway saw record throughput of 888,000 20-foot-long containers – up 23% on the previous best performance for the first half of a year.

The new fourth berth will raise capacity by a third and completion will coincide with the delivery of a new wave of 24,000 20-foot-long container vessels in 2023/2024, which will all be operated between Asia and Europe.

Along with the Port of Tilbury and Ford’s Dagenham plant DP World London Gateway will form the Thames Freeport, which was awarded freeport status by the government earlier this year.