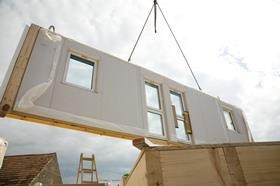 The man in charge of housing at the West Midlands Combined Authority has said he wants to see half of the thousands of new homes the group is planning to build in the next decade constructed offsite.

Gareth Bradford, who is the head of housing and regeneration at the authority, told Building at this week’s Mipim property show: “Councils in the Midlands are pushing for offsite and we really want the region to be the centre of UK modular.”

Bradford said part of the reason local authorities in the region were so in favour of modular housing was the fact that 60% of new housing in the region is being planned for derelict brownfield sites.

Bradford said: “Modular lets you bring forward new homes at pace. It lets you transform brownfield sites that people have had to look at for a long time.

“These sites that are being developed now have sat vacant for decades so it’s great that they are being built out and built out at pace.”

By 2030, the group wants to be building 16,500 homes a year. The WMCA is made up of 18 local authorities and four local enterprise partnerships.