Morgan Sindall has been chosen to build a 34-storey mixed-use development in Newham, one of its largest ever deals.

The £107m Manor Road Quarter scheme in Canning Town, east London, features 355 apartments, half of which will be affordable. 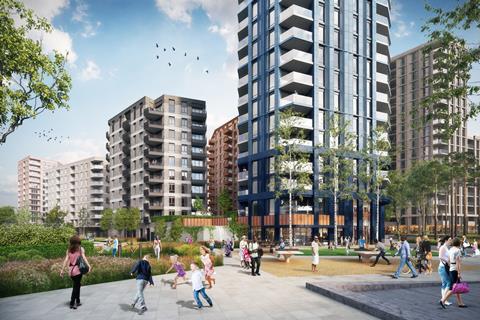 Designed by EPR Architects, others working on the scheme include Gardiner and Theobald as QS, Gleeds as client project manager while Metropolitan and Thames Valley Housing Association is primary tenant and purchaser.

The job is being developed by English Cities Fund, a joint venture between Homes England, funder Legal & General and Morgan Sindall-owned Muse Developments.

Morgan Sindall said it was using a number of offsite initiatives to speed up construction and reduce the amount of scaffolding needed on the job which is expected to finish at the end of 2024.

As well as housing, the scheme will also include 8,000 sq ft of commercial and retail space.