Exclusive: Morgan Sindall has won the high-profile job to refurbish the former Daily Mail headquarters on the Thames riverside 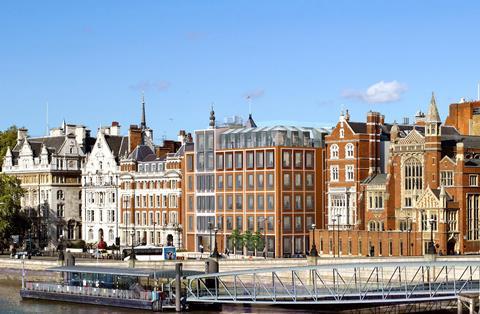 Morgan Sindall has won the high-profile job to refurbish the former Daily Mail headquarters on the Thames riverside.

According to Barbour ABI, the contractor has fought of competition from Galliford Try, Skanska, ISG, and Wates to be chosen as preferred bidder for the £28m job to refurbish the 120,000 sq ft Grade II-listed Carmelite House building at 50 Victoria Embankment.

The scheme, designed by Fletcher Priest Architects, is being developed by Quadrant Estates and Orion Capital Managers.

The site, which was previously the Daily Mail headquarters, has consent for a redevelopment providing 130,000 sq ft of net office space.

Morgan Sindall has targeted commercial buildings in London as a key growth market.

In September the firm won a £30m contract to build a Bennetts Associates-designed office building for Derwent London.

Morgan Sindall has also been awarded two projects totalling £42m in the rail and water sectors.

The firm has been appointed to build the £20m North Doncaster Chord railway project by Network Rail. The job will entail construction of 3.2km of new twin track railway and a six span viaduct to add extra capacity.

The firm is working with engineer URS on the project that will ease capacity pressures on the East Coast Mainline.

The project is worth £22m and will see Morgan Sindall joined by engineer Grontmij.

John Morgan, chief executive of Morgan Sindall Group, said: “We have a strong track record in the growth infrastructure sectors of rail and water and we look forward to working in close partnership with Network Rail and Yorkshire Water Services to deliver these important projects.

“We are focused on schemes which bring about improvements to environments and services and I am delighted that these projects will improve infrastructure for residents and visitors to Bridlington and for the thousands of passengers and freight services that rely on the East Coast Main Line.”