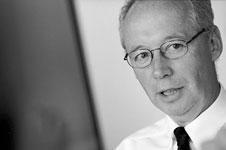 Richard Cuthbert vows to grow business, but observers warn it is vulnerable to private equity predators

Richard Cuthbert, chief executive of Mouchel, has dismissed claims that the company remains vulnerable to takeover despite VT Group abandoning its hostile approach.

Speaking after the engineer announced its results for the six months to 31 January 2010, Cuthbert said he would grow the business based on its £2bn order book, and added that he “hadn’t heard about any interest” from other potential buyers.

Despite his claim, several sources have said private equity firms looked at the company before engineering support services firm VT Group, went public with its £276m bid in December. They said firms may look again, given the group’s high level of drawn debt, which stood at £153.7m at the end of January, leaving it with £26m of headroom.

One private equity source said: “The company is in some strong markets but is still vulnerable because of its debt position.”

Transatlantic acquisitions have not had a huge record of success

Mouchel’s share price has fallen by a quarter from a high of 267p in December to 198p, which the source said could also arouse the interest of buyers. The price fell sharply after VT dropped its bid last month, having been targeted for takeover itself by defence support services firm Babcock.

Cuthbert dismissed the idea of a sale to a large US consultant such as Aecom or Jacobs, saying: “Transatlantic acquisitions have not had a huge record of success.”

The £740m-turnover firm also announced it was close to selling its Middle East business, after being hit by £10m of bad debt in the region. Cuthbert said it had selected a preferred bidder, based in the Middle East, but refused to reveal its identity.