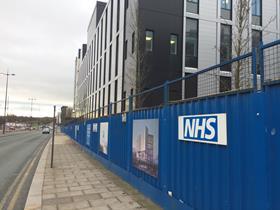 The Public Accounts Committee has called on government to tell taxpayers about the Private Finance Initiative’s value for money.

The committee’s report on PFIs, which was published yesterday, said the Treasury had no plans to assess the value for money of the model which was first introduced back in the 1990s.

The committee said PFI’s initial benefit was that expenditure had been kept off the government’s books but the ongoing costs to the institutions at the front line have been high and the contracts inflexible.

Meg Hillier, chair of the Public Accounts Committee, questioned the worth of PFI, which has been in the headlines since Carillion’s collapse.

Three PFI projects were cited as problem contracts in the failed contractor’s first profit warning last July, contributing to a provision of £845m – of which £375m related mainly to the three UK projects.

These were later identified as the £550m Aberdeen Western Peripheral Route, the £335m Royal Liverpool Hospital (pictured) and the £430m Midland Metropolitan Hospital.

She said: “Much has changed in the past quarter-century but government’s inability to answer basic questions about PFI remains undimmed.

“It beggars belief that such apparently institutionalised fuzzy thinking over such large sums of public money should have prevailed for so long.

“The Treasury simply cannot support its assertion that PFI represents good value for money. Yet while government is now seeking to collate the PFI data that does exist, it does not intend to publish the results of this work. This is unacceptable. Government must level with taxpayers about the value of PFI.”

The committee said it was disappointed that concerns it had raised about the model in 2011 had not been addressed.

It said government’s reform of PFI had been fairly limited, with its follow-up PF2 allowing “greater transparency on a method that didn’t change fundamentally“.

Hillier said government also had to be clearer with public bodies about how it intended PF2 to be used.

She said: “The Treasury and Infrastructure and Projects Authority must also be far clearer about how it expects public bodies – many of whom are already locked into costly and inflexible PFI projects – to use PF2.

“We are not convinced the design of PF2 has fixed the underlying weaknesses of the previous method.

“Government’s own figures suggest the UK needs to spend some £300bn on infrastructure over the next couple of years. It is critical that taxpayers are not further lumbered with excessive costs arising from poor contracting.”

The committee said there were only a handful of PF2 projects in the pipeline, suggesting government had “lost faith in its own usage of PFI”.