MPs get behind desert power scheme 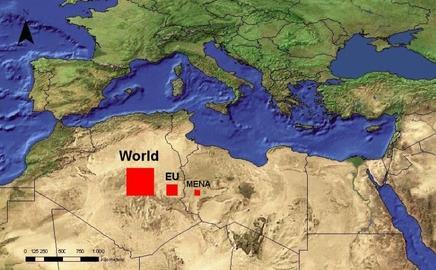 An Early Day Motion calling for the government to support a Concentrated Solar Power (CSP) plant and grid was signed by 55 MPs in one month, green activists say. The 400 billion euro scheme would collect solar power in North Africa and the Middle East and transmit it throughout that area and to Europe over a high-voltage direct-current (HVDC) grid.

Enthusiasts point out that a 300 x 300km square of desert covered with CSP technology would generate the electricity currently consumed by the world; a 127 x 127km square would be enough to supply the EU. A 55 x 55km square is TREC's current suggestion. The plants could be built in two to three years rather than 10 for nuclear, they add.

Dartford MP Dr Howard Stoate set up the motion, calling for politicians to get behind finding investment for the scheme infrastructure, which would cost the UK about 5 bn euros. With Parliament now in recess, all Early Day Motions have lapsed and Dr Stoate or another MP would have to post one in the next session to force a vote on the issue.

Gerry Wolff of TREC-UK, a branch of Trans-Mediterranean Renewable Energy Co-operation (TREC), which devised the idea some years ago, said he was encouraged by the level of support garnered in Parliament in a short period of time.

“The project desperately needs political leadership,” he said. “Someone like the EU or the new Mediterranean Union (UfM) needs to support it for engineers to be able to build such a large network.” Private investment would be sought to build the power plants needed, he said.

Wolff added that was encouraged by French president, Nicolas Sarkozy’s endorsement of a ‘Mediterranean solar plan’ and when Gordon Brown gave his backing to the idea in a speech to the UfM last month, he nearly ‘fell of his chair.’

Wolff admitted that plant costs were high, but said they were comparable to replacing the equivalent number of power plants, which must anyway be done on a 30-40 years cycle.

“5 billion euros taxpayer investment [also] sounds a lot, but it’s worth remembering that widening the M1 cost 7.5 bn euros. And disposing of the UK’s nuclear waste had a price tag of 132 bn euros at the last count.”

The text of the Early Day Motion

That this House notes that Concentrating Solar Power (CSP) technology, a means of capturing solar energy from deserts, has the potential to generate a substantial proportion of Europe's future electricity needs; notes that it would be feasible and cost-effective to transmit energy derived from desert based CSP plants in North Africa to Europe via the creation of a high voltage direct current (HVDC) super-grid, as this would restrict transmission losses to just three per cent. per 1,000 km; further notes that the cost of collecting solar thermal energy equivalent to the energy output of one barrel of oil is currently about US$50 and is likely to fall to around US$20 in the future, which is substantially less than the current world price of oil; welcomes the work that has been done by the Trans-Mediterranean Renewable Energy Co-operation (TREC) in promoting the development of CSP and an integrated Europe and North Africa-wide HVDC super-grid; and calls on the Government to endorse TREC's proposals formally and to work with its international partners to advance the concept.