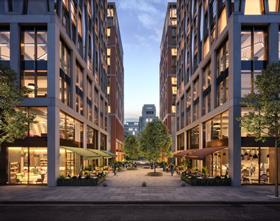 Multiplex has been handed a £400m design and build contract to transform the site of the former Metropolitan Police headquarters in Westminster.

The Broadway project, which is being masterminded by developer Northacre, is a 1.72 acre mixed-use scheme made up of 268 apartments, 142,000ft2 of commercial and retail space, public realm and a new thoroughfare linking Victoria Street with St James’s Park tube station.

The Squire & Partners-designed scheme (pictured) received planning permission back in 2016. Robert Bird are acting as the structural engineer on the job.

Located at the former Met Police HQ, the scheme features six towers which the developer said would “create a new vibrant commercial and cultural quarter”.

Apartments within the development will have views of well-known landmarks across the surrounding area, including the Houses of Parliament, Westminster Abbey, Big Ben, Buckingham Palace and Green Park.

Multiplex is due to take possession of the site next January and the project is set to be completed in December 2021.

Last week, the 22 Bishopsgate tower builder said it was having to make a provision of £10m on an unnamed problem job which it is due to complete this year.