Designed by David Chipperfield, Grosvenor Square project is one of biggest London building jobs to be awarded this year

Multiplex has won one of the biggest London building jobs to be awarded this year, Building can reveal.

The firm is now preferred bidder for Qatari Diar’s £400m scheme to turn the former US embassy at 30 Grosvenor Square in London into a luxury hotel, having beaten remaining rival Balfour Beatty. 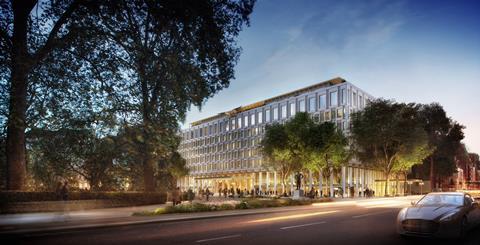 Multiplex, which earlier this month finally completed work on the City of London’s tallest tower, 22 Bishopsgate, is expected to start work on the job next month.

A winner had been due earlier this year but the covid-19 pandemic delayed the bidding process which saw a pitch from Mace culled earlier on – although its interest didn’t disappear completely, with the firm continuing to keep a watching brief on the job.

Multiplex is working for Qatari Diar at its Chelsea Barracks residential job in west London while the developer is one of several firms involved in the Lewisham Gateway housing scheme, the second phase of which was won by Balfour Beatty last summer.

The work to revamp the Grosvenor Square building has been designed by David Chipperfield Architects and includes 137 guest rooms, five restaurants, six flagship retail units, a spa and a 1,000-person ballroom. The hotel will be operated by Hong Kong-based Rosewood Hotels.

Careys has carried out the soft-strip work on the grade II listed building while others working on the scheme include QS Gardiner & Theobald and engineer AKT II. Project manager is Buro Four.

The last US embassy staff moved out back in January 2018 into its new building, constructed by Sir Robert McAlpine, at Nine Elms in Vauxhall.