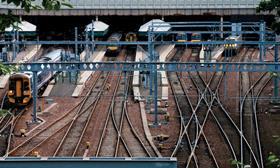 Two out of five major infrastructure projects run into difficulties causing serious delays, a new survey from Aecom has revealed.

The Future of Infrastructure survey questioned more than 500 industry decision-makers working in major organisations across North America, Europe and Asia Pacific, of which 21% were from the UK.

It found that three quarters of projects fail to get going until at least five years after the agreed start date, while more than a third of respondents cited funding shortages as a reason for this.

Many professionals would like to see user-based funding models built on enhanced approaches to the traditional toll-gathering solutions, Aecom added.

But 72% of respondents said the mix of public and private partners on infrastructure schemes presented a range of different interests and priorities that made it harder for a government to get maximum value from a project.

Over half said that better incentives for private contractors to bid for earlier stage projects and structuring contracts to reward for time and cost savings would be effective solutions.

And 36% suggested that realistic and fair project-risk sharing would make a noticeable difference to infrastructure project delivery, while 35% said ring-fenced funding in national budgets would help.

Infrastructure is expected to play an important economic role in the future, with eight in 10 agreeing that national prosperity depends on it as strong transport connections enable regeneration of urban areas, which allows for new job creation and the delivery of goods and services.

But eight in 10 across the US, UK and mainland Europe said their countries don’t appreciate the economic value created by infrastructure development. This view is shared by 74% of Asia Pacific respondents.

More than a quarter cited political upheaval and economic uncertainty as potentially impacting on the industry’s ability to deliver major infrastructure projects in the next five years and in the UK, only 35% believe that civil infrastructure is well placed to contend with future funding constraints.

Aecom chief executive Michael Burke said: “Infrastructure networks and systems around the globe are under considerable strain. Amid urbanization, climate change and the dizzying pace of technological advances, just narrowing the gap that exists is no longer a sufficient goal. What’s needed is a giant leap forward.

“The industry must embrace innovation and develop new ways to fund and deliver projects faster, smarter and better.”