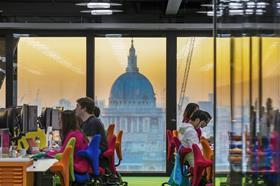 RSHP’s office at the Cheesegrater

Norman Foster and Richard Rogers have written to the prime minister warning that Brexit could be “devastating” for British architecture.

Along with 400 other leading names from the profession, they have signed an open letter arguing that Britain’s negotiations with the EU are ignoring the will of 48% of the people who voted to remain.

“We do not see within any of your negotiation with the EU any consideration whatsoever of the circumstances that we need for our industry and associated institutions to continue to thrive,” it says.

It points out that the “skilled worker” definition would exclude almost everyone who comes to the UK to work in architecture – but that the profession depends on overseas labour.

Other signatories include all 12 senior partners at RSHP, Alison Brooks, David Chipperfield, Patrick Lynch and former RIBA president Stephen Hodder, as well as Niall McLaughlin, and the founders of practices including Haworth Tompkins, AHMM, Walters & Cohen and Sergison Bates.

Several Stirling Prize winners and nominees are among the supporters of the letter which was initiated by Piers Taylor of Invisible Studio.

Earlier this month Mace chief executive Mark Reynolds said the government has completely ignored industry worries over access to labour once the UK leaves the EU next March.

And Gleeds chairman Richard Steer told business secretary Greg Clarke he and his Cabinet colleagues’ mismanagement of the negotiations was making the country a laughing stock. “It is fair to say that for those outside of our country, looking in at the UK, in image management terms alone Brexit has not been our finest hour.”

‘There is no good Brexit’

Architecture is an international industry where cooperation across borders is critical to the success of our practices. Much of our work is pan-European, and many of our staff are from the EU. Figures suggest that 1 in 5 architects in the UK are from the EU, and 1 in 3 in London. We thrive on this sense of being part of an international community and have – as a culture – benefitted immeasurably from the freedom of movement that has enabled many European architects to contribute to the enormous success that is British Architecture. We believe that without being members of the EU this success would not have been possible. We are concerned that unless we are members of the EU with the free movement of ideas and people that this brings, the culture within which we practise architecture in Britain will be immeasurably diminished. At present, under proposed immigration rules, your definition of a skilled worker excludes almost all of those who come here to work in our industry. For us, instead of being an opportunity, this is devastating.

We believe that there is no good Brexit. We also believe that the 48% of the votes cast in the last referendum have been ignored. When you talk of the “will of the people” you are not taking into account that almost half of all votes cast were to remain, and polls show that in the period since the referendum many of those who voted leave have changed their minds. With this, we do not see within any of your negotiation with the EU any consideration whatsoever of the circumstances that we need for our industry and associated institutions to continue to thrive.

Jeremy Till - Central St Martins - University of the Arts London

- This is just a selection of signatories - names are being added all the time via brexit@invisiblestudio.org