Number's up for Brighton bingo hall 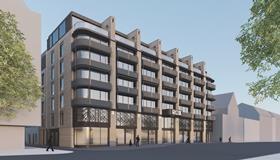 London practice Cove Burgess Architects has been appointed to turn a former bingo hall in Brighton into new homes.

The Astoria Theatre was built in 1933 in the Art Deco style becoming a cinema before shutting in 1977 and operating as a bingo hall for 20 years.

But time was called on bingo in 1996 and the grade II listed structure has been empty ever since.

It was due to be demolished and turned into a business centre under plans drawn up by Conran & Partners and approved five years ago.

The latest scheme, lodged earlier this month with Brighton & Hove council, would see the building demolished to make way for a new building of up to seven storeys with 70 apartments and retail and workspace at its ground and basement levels.

The scheme, drawn up for developer Ktesius and dubbed the “Rox”, would replace the earlier Conran proposals, which were predominantly commercial space.

The Conran-designed development would have replaced the cinema with office space, start-up and enterprise units, meeting and community spaces and a restaurant.