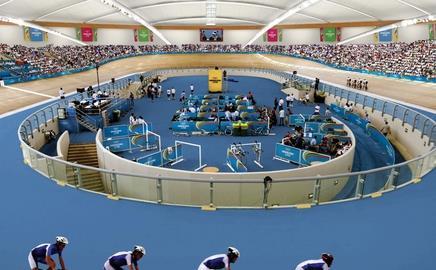 The Olympic Delivery Authority (ODA) is set to sign up the world’s leading track specialist to design the velodrome for the 2012 Games.

Architects and engineers were battling to include him in their teams but it is understood that Ron Webb, who designed the track for the Athens and Sydney Olympics, is now talking directly to the ODA.

An architect bidding for the scheme said Webb was in high demand: “We all knew that with Ron in your team you’d win. It’s better for all to appoint him independently.”

Webb, a former cyclist who rode in nine world championships for Australia, has been responsible for nearly every major cycle track in recent times, including the Welsh National Velodrome in 2002.

Meanwhile, contract documents say the velodrome will be procured separately from the velopark as a design-and-build contract.

The design-and-build approach has been criticised by high-profile figures including Richard Rogers and Jack Pringle, the RIBA president, who fear it would lead to lacklustre buildings.

An ODA spokesperson said: “The design team will draw up plans for the whole velopark, then half the team will be novated across to work with the design-and-build contractor for the velodrome, while the other half will continue work on the legacy mode.”

However, the contract documents say the design team may not be novated across and that the design-and-build contractor will complete the project using design resources procured directly by them.

Building understands that the firms who entered bids for the velopark include: Make, Marks Barfield, David Adjaye with PTW and KSS Design, Faulkner Browns, Foreign Office Architects, Foster + Partners and David Morley Architects. A shortlist is expected in the next few weeks.