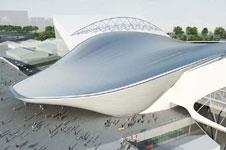 The cost of the Zaha Hadid-designed Olympic aquatics centre will be £214m, a report claimed last night. The BBC claimed the new budget had soared in spite of the design of the building being scaled down since it was first revealed in 2005.

Reports this morning put the jump in the budget - it was originally costed at £75m - as down to inflation and VAT. Client the Olympic Delivery Authority would not reveal the budget until negotiations with contractor Balfour Beatty had been completed, the BBC said.

Images of the new design for the centre, which will have a capacity for 17,500 spectators, were revealed at the start of the week.