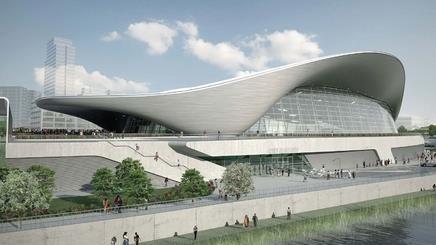 The aquatics centre for the London Olympics will not meet the Olympic Delivery Authority’s target for energy efficiency while the Games are taking place.

The original sustainability documents published by the ODA suggested the centre would beat by 15% the carbon target in Part L of the Building Regulations. However, a planning application document lodged last week reveals that this target will not be hit until after the Games end.

The document says the centre will be in a “temporary configuration” during the Games, and therefore the carbon target does not apply until 2013, when it switches to “legacy mode”.

By that date, renewable energy infrastructure will help the venue hit the 15% target.

An ODA spokesperson said: “All permanent parts of the centre will be designed and constructed to meet the 15% target during the Games and the legacy. We are also looking at how we could incorporate renewables in the centre to meet the target of 20% of energy demand.”

Shaun McCarthy, chair of Olympic watchdog the Commission for a Sustainable 2012, said: “If there isn’t an energy target for the aquatics centre during the Games, or it is different from the legacy target, then we’d be concerned.”

The news came as it emerged that the ODA was conducting a feasibility study into the leisure use of the aquatics centre after 2012. This could include the building of a two-storey annexe with slides and flumes.

The Olympic stadium site could house a sports school after the 2012 Games. If the plan went ahead the secondary school would share its facilities with a football or rugby team.