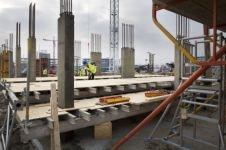 Chancellor of the exchequer Alistair Darling has postponed a ministerial meeting due to sign off extra funding for the Olympics this week.

According to sources close to the situation Darling had been due to meet with Olympics minister Tessa Jowell, culture secretary Andy Burnham, communities secretary Hazel Blears and transport secretary Geoff Hoon today to sign off extra government cash.

The money is needed principally because of the failure of Australian developer Lend Lease to arrange the £1bn funding needed for the 2,800-home athletes' village. It is thought the meeting was set to approve drawing down more money from the £2.2bn Olympic contingency fund for that purpose.

The government has already signed off £95m from the contingency fund to pay for the development of the village, on which work started in May, after Lend Lease was unable to agree funding from its backers.

However, it is also thought the meeting was due to be discussing how to proceed with the media centre, following the scrapping of plans for the original £385m scheme backed by development consortium Igloo Carillion.

A spokesman for the Department for Culture, Media and Sport admitted the meeting had been postponed but said it was not able to say when the meeting will be reconvened.

The news comes as Tom Dacey, chief executive of Southern Housing Group said the housing association had now received full board backing for its involvement in the Olympic village, revealed by Building in December. Dacey said the board had given full sign-off to its joining in the 1st Thames Consortium of developer 1st Base and housing association East Thames Group, which will turn much of the athletes' village in to affordable housing after the games.