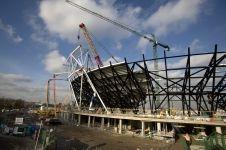 International inspectors have arrived in London to check on the progress of the city’s build programme for the 2012 Olympic Games.

The International Olympic Committee Co-ordination Commission will spend three days in the capital examining preparations for the event. Its visit will include a tour of the construction site.

Construction has now started on all five of the main venues, after work on the foundations of the media centre got underway last week.

John Armitt, the Olympic Delivery Authority chairman, said: “It is clearly visible how much progress has been made on the site since the commission visited last year. The Olympic stadium has changed the east London skyline, the aquatics centre roof is starting to take shape and the first residential blocks for the Olympic village are out of the ground.”