Contractor teams up with specialists to launch new trade body

Laing O’Rourke, L&G and Ilke Homes are among the firms to form a new trade body for modular housing firms.

The three have been joined by TopHat, the modular housing firm which is being backed by £75m of funding from US investment bank Goldman Sachs, and Urban Splash, the Manchester-based developer which also has a modular housing business that is bankrolled by Japanese investor Sekisui House. 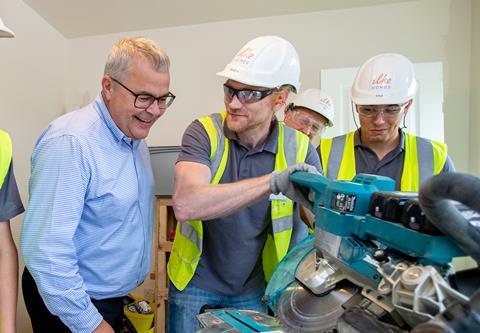 Dave Sheridan (left) has been appointed chair of the new group

The scheme, called Make Modular and which has been launched by manufacturers’ organisation Make UK, is being backed by O’Rourke, L&G, Goldman Sachs, Sekisui House and TDR Capital. Homes England has also thrown its weight behind the group.

Dave Sheridan, the boss of Ilke Homes, has been appointed its chair.

“But to make real significant progress, modular housing needs to have equal access to land for construction with many sites still favouring traditional modes of construction.”

The group added that it could build 75,000 modular homes by the end of the decade with members’ factories producing a home every two hours.