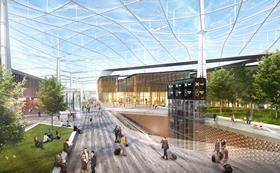 Growing workloads in Australia and the US helped send turnover at HS2 station architect Grimshaw up by a fifth last year.

Revenue at the firm, which is also the concept architect on the expansion of Heathrow airport (pictured) and was behind the revamp of London Bridge station, jumped to £71m on the back of more Down Under.

The firm has nearly doubled turnover in the past three years from 2015’s £36m and in the last 12 months it began work on an aquatics and leisure complex in Sydney and a 40-storey tower in the central business district of Melbourne. It also won work to masterplan the revamp of New York’s JFK airport as well as design a new terminal for Newark International airport.

The architect is also working on drawing up plans for new HS2 stations at London Euston and Birmingham Curzon Street where the £33bn project’s first phase starts and finishes.

The firm has also opened an office in Los Angeles taking the number up to eight which includes offices in London, New York, Sydney and Dubai.

Last month, Grimshaw appointed Kirsten Lees as managing partner of its London office, the first time a woman has held the role