Plans by AHMM to redevelop a run of shops on Oxford Street and replace them with a single eight-storey building have been given the green light despite the objections of Historic England.

The scheme, created for King Sloane Properties and Element Capital, will demolish all but the facades of four buildings on the south side of the shopping street, but preserve more of the grade II-listed No 35, which was built in 1909.

Two further shops – Nos 41 and 43 – would be demolished in their entirety, the main grounds for government heritage adviser Historic England’s objection to the proposals. The scheme will also erase Falconberg Mews from the West End map.

Historic England said the proposals were the “antithesis” of everything that made the local area special.

But recommending the scheme for approval, Westminster planning officers said they understood Historic England’s concerns but argued that the scheme needed to be considered “in the context” of the on-going regeneration of the east end of Oxford Street.

Others working on the scheme include Gardiner & Theobald as project manager and cost consultant, Heyne Tillet Steel as structural engineer and M&E engineer Hoare Lea. 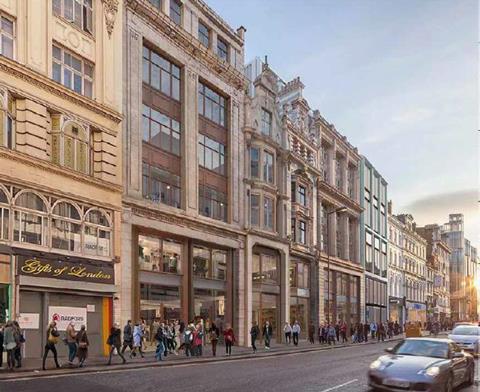