Parliament refurb to go ahead after Lords agree to move out 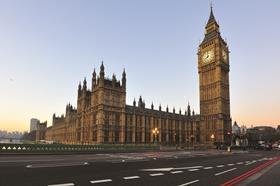 Members of the House of Lords have agreed to move out of the Palace of Westminster to allow for the desperately needed £3.5bn restoration of the crumbling grade I listed building.

The Lords’ decision comes after MPs voted last week in favour of leaving the Palace.

They agreed there was “a clear and pressing need to repair the services in the Palace of Westminster” and that “a full and timely decant of the Palace is the best and the most cost-effective delivery option”.

The motion, which was brought forward by Baroness Evans of Bowes Park, was agreed to last night.

There was some debate surrounding the need to move out, with Conservative peer Lord Naseby moving to amend the motion to say “calls for a more thorough evaluation of the options available for a phased programme of renewal”.

He withdrew the amendment before the motion was passed.

Builders carrying out vital repairs to the Palace of Westminster are expected to start by the middle of the next decade now that both MPs and the Lords have agreed to vacate the crumbling building.

MPs voted by 236 to 220 for a proposal last week that will pave the way for a full programme of works.

The House of Commons will relocate to Richmond House, a former department of health building in Whitehall, while the restoration takes place.

Ahead of the debate in the lower house, government heritage watchdog Historic England had warned that going back over the already recommended three options would mean years of delay which could see the Palace of Westminster put on its ‘at risk’ register.