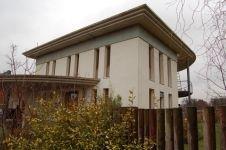 I came away from my NHBC tour of Passivhaus properties in Frankfurt with the impression that the region had found a nice little earner for itself.

The fact that certain new buildings in wealthy Frankfurt (home of the European Central Bank) are required to come up to the standard is certainly positive for the local cottage industry that has sprung up around the practice.

It’s all pretty specialised. Architects say they have only been able to get their hands on tall enough Passivhaus windows for balconies quite recently. A funding mechanism with a state bank allows those building to Passivhaus standards special rates on loans. The easiest way to plan a Passivhaus building is to use the Passivhaus Institute's planning package and the institute needs to certify all construction. (It’s kind of like the BRE but with focus.) If the building practice takes off across Europe, those local manufacturers will make a killing. It is clear that the city has more reasons that one to get behind its home-grown methodology.

But for all the talk of German engineering knowhow and methodology, is 35,000 buildings since 1991 enough to go on? Or does the build rate of a couple of thousand a year (being generous) indicate that Passivhaus is a bit of a bugger to build?

To put it another way, was it not remarkable that senior bods from the civil service and UK housebuilders were touring these properties with such rapt attention to the future? Does it show that a clear aim will win the day? Or was the tour aspirational?

“You can build anything else if you’ve got the money,” as one of our number, a well-known products manufacturer, said.


How much more does it cost? The numbers indicate a 5-7% extra on the build cost, but that is clearly an average. If your property faces north-south, then you might get away with that, but architects Albert Speer & Partner, who are working on several Passivhaus schemes in the area, say that those cursed with an east-west elevation could be in trouble financially. They had no problem getting down to the 17kWh/m3 energy level, but the final two, taking them to the required less-than 15kWh/m3, cost them disproportionate thousands of euros, they said. I wonder what the payback period here is.

What of the buildings themselves? One property in a new development called Riedberg seemed like a classy family home. Most of us decided that we wouldn’t mind living in the three-plus bedroom place. The half-a-million euro price tag somewhat put us off, given its somewhat unprepossessing location on the top of a hill in a remote area with a view of the Autobahn. And then there was all that kit in the basement housed in a room larger than my kitchen. What was it all? Could your average homeowner drive a property with all those pipes and dials? Perhaps Germans weren’t to be trusted either; there was talk of gaming the system so inhabitants thought they had turned off the ventilation while nothing much had happened at all.


Where the kit was familiar, it was in the wrong place. A small radiator above a door over which air was blown in a new inner-city development was apparently intended to counteract the dryness that some residents have apparently complained about. The mechanical ventilation with heat recovery (MVHR) system, part of the Passivhaus set-up, is blamed for that.

But I couldn’t ask any residents, because there were none to hand. My travelling colleagues were most sniffy about the lack of user satisfaction that our hosts were able to display.

With the 12mm-thick plasterboard still on display in the unpainted apartment (notably warm for a building site on a cold day) I was struck, as ever, by the level of quality that was required to build the things. All holes for services have to be planned before construction. External details and party walls all have to be meticulously designed and installed. Is the UK housebuilding industry really ready for these German standards? Some 35,000 there may be worldwide, but none of them are here yet.

The thought occurs that, although the methodology may be sound, perhaps we could loosen the numbers, you know, a little bit, while we make our way towards acceptance of German precision.