Perkins + Will tunes in with deal for US giant Turner 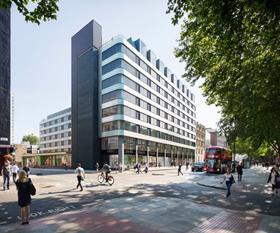 Perkins + Will has landed a deal to fit out the new London office of the US media company Turner, whose TV stations include news outlet CNN and the Cartoon Network children’s channel.

Turner will begin moving the first of its 1,000 staff into its new home at 160 Old Street in autumn 2019 with the headquarters including a purpose-built London newsroom and studio for CNN’s Europe and Middle East operations.

Staff from media firm Time Warner, Turner’s owner, and Time Warner’s HBO cable network will also move across along with Turner, which is currently based on Great Marlborough Street.

Turner is taking just over 98,000sq ft of the building (pictured) and has an option to take on another 18,000sq ft of space at the site.

The entire building is being redeveloped by Great Portland Estates and Ropemaker Properties with plans by architect Orms for the building’s redevelopment approved back in March 2015.

Main contractor Wates is due to finish work on the 11-storey block, built in the 1960s and previously occupied by the Royal Mail, next March.

It will feature over 150,000sq ft of office accommodation and more than 5,000sq ft of retail and restaurant space on the ground floor.