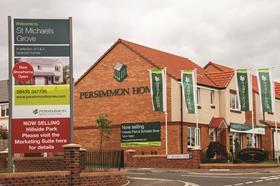 Persimmon has hired Roger Devlin as its new chairman.

Devlin took up the same role at bookmaker William Hill last month and the move will see him step down from the chairman’s role at pub group Marston’s, which he has held since 2013, along with a senior independent director’s role at the Football Association at the end of May.

Devlin, who will join the FTSE 100 housebuilder at the beginning of June, said: “Persimmon has delivered excellent financial performance as well as materially increasing output in recent years. The housebuilding industry offers good growth prospects.”

Last month, the firm cut the controversial bonuses it said it would hand out to its top executives including chief executive Jeff Fairburn after coming under fierce criticism from shareholders and politicians.