‘Eco-towns’ policy for green settlements scrapped by coalition, despite their committment to ‘garden cities’ 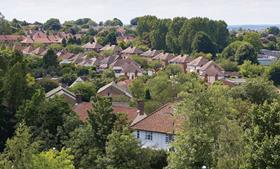 Planners have hit out at the government’s decision to cancel planning policy designed to ensure any new settlements are built to high environmental standards.

The Eco-towns planning policy statement was put in place under the last Labour government as part of the architecture to support then prime minister Gordon Brown’s plan for 10 5,000-home “eco-towns”.

However, despite the fact the Coalition is planning a swathe of new settlements under the “Garden City” label, which it says will at the very least “set high standards for design, quality and the provision of green space,” it has cancelled the planning guidance designed to ensure new towns are socially and environmentally sustainable.

Kate Henderson, chief executive of the Town and Country Planning Association (TCPA), said the decision to cancel the guidance, which said settlements should aim to be zero carbon with homes that meet Building for Life, Code for Sustainable Homes and Lifetime Homes standards, “marks the end of any benchmark for building the high quality communities of the future.”

She said: “The eco-towns standards kept alive aspirations for well-planned housing growth which promoted people’s well-being while enhancing and protecting the natural environment.  Taken together with other measures to deregulate the English planning system we are seeing an end to innovation in the built environment.”

The TCPA, which helped the previous government draw up the cancelled guidance, said the relaxation of rules to allow developers to turn offices into homes without receiving planning consent was part of the same trend. Henderson said: “This means that local authorities can no longer ensure that the homes are affordable or energy efficient, or secure decent play spaces, green infrastructure, or contributions to education provision.”

The planning guidance had also sought to ensure that fewer than 50% of journeys in new settlements were taken in cars. The cancellation follows the Coalition receiving legal advice that the move is unlikely, by itself, to have significant environmental effects, and so a full Strategic Environmental Assessment is not required.

Cancelling the policy, housing minister Brandon Lewis said: “Despite a pledge of 10 new towns by the last government, the eco-towns programme built nothing but resentment. The initiative was a total shambles, with developers abandoning the process, application for judicial review, the timetable being extended over and over, and local opposition to the unsustainable and environmentally damaging proposals.”