Central Methodist Hall was built in 1904

A three-storey rooftop extension could be added to Birmingham’s listed Central Methodist Hall as part of plans to convert the former club venue into a hotel.

Todd Architects has submitted designs to Birmingham City Council which would see the heritage building filled with up to 150 hotel rooms and eight new bars and restaurants at ground and basement levels.

The proposals were drawn up on behalf of Press Up Hospitality Group and its sister company Oakmount – the former of which will operate the Corporation Street Scheme under its ‘The Dean’ brand. 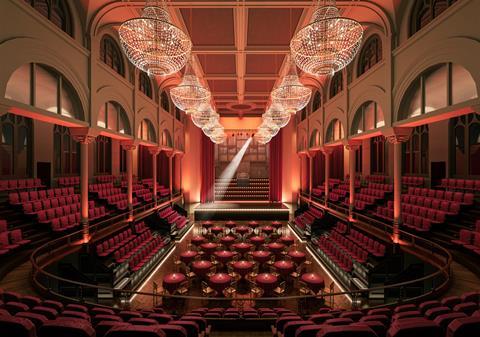 The central hall will be refurbished to create a 1,500-seat event space

Todd’s’ plans for the hotel include the refurbishment of its central hall to create a 1,500-seat event space, with the pulpit area converted into a stage for visiting acts.

The designs also include a traditional members’ club cocktail lounge, two expansive external terraces and a flagship rooftop restaurant with panoramic views across the city.