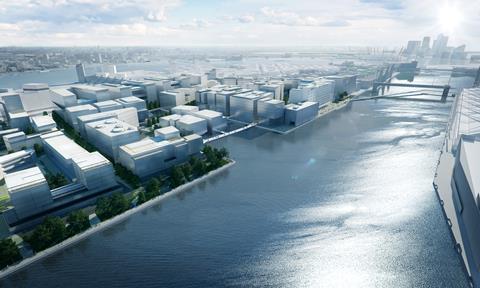 Plans have been unveiled for the transformation of the Silvertown Quays area of east London’s Royal Docks.

The 62 acre scheme will deliver 7 million sq ft of development, including a commercial quarter and 2,500 homes, opposite the Excel Centre exhibition centre.

Client Silvertown Partnerships - a consortium of Chelsfield Properties, First Base and Macquarie Capital - said the development will create up to 14,000 new jobs.

The commercial quarter is designed to attract global brands by offering a variety of pavillions and showrooms to showcase products and put on events, as well as office space, Silvertown Partnerships said.

A series of schemes, including Chinese developer ABP’s plans for a business park in nearby Royal Albert Dock and Ballymore’s plans for 3,500 homes at Royal Wharf, are set to transform the Royal Docks in the coming years.

Sir Stuart Lipton, of the Silvertown Partnership, said: “We want to secure the future of the Royal Docks:  our vision for Silvertown Quays will re-engage the heritage of enterprise and innovation in the Royal Docks; securing a vibrant future by creating up to 14,000 new jobs and 2,500 new homes in a new and enlivened waterfront destination.”

“We are delighted with the positive response from the local community and the revised plans unveiled today demonstrate how local people have influenced the evolution of our proposals.”

“Returning this historic area to its former glory as a hub of businesses and enterprise, the regeneration of Silvertown Quays will create thousands of new homes and jobs in London’s east end, and make the Docklands a go to visitor destination, helping to unlock the economic potential of the surrounding area.”