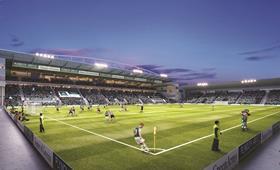 A controversial £50m redevelopment of Plymouth Argyle football club’s Home Park ground has been approved by the city council.

The scheme includes a new grandstand, 10-screen cinema, ice rink and a hotel with work now expected to begin next month and complete in 20215.

At a packed council meeting yesterday, critics raised objections over car parking in the area, construction waste, landscaping, retail impact and the future of 18 nearby hornbeam trees.

But club owner the Akkeron Group, which took over the club in 2011 after it went into administration, said the development would create 1,000 new jobs, improve Home Park’s facilities and put Argyle on a more sustainable footing.

Akkeron founder James Brent told the meeting at Plymouth’s Civic Centre the new facilities would “enhance pride and aspirations of city”, according to the BBC.