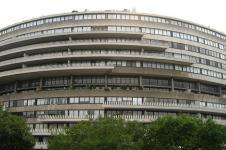 An attempt to auction the Watergate Hotel – the infamous Washington landmark that shot to notoriety following a presidential scandal – has failed to attract any bids.

The price on the building opened at £15.2m, but not one of the 10 parties registered to bid put in an offer.

The hotel housed the Democratic National Committee headquarters, which were broken into in 1972 in a scandal that resulted in the resignation of President Richard Nixon. It forms part of the capital's Watergate Complex.

A firm called Monument Realty bought the Watergate in 2004 in the hope of transforming it into luxury flats, but closed the hotel two years ago after running out of funds.

The auction attracted crowds of spectators. PB Capital Corp, which had loaned $40m to Monument Realty, will take back the building and try to find a buyer.

Credit: Kyle Rush
The hotel housed the Democratic National Committee headquarters, which were broken into in 1972