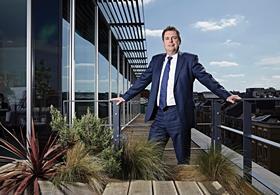 Cala Homes has amassed a potential development pipeline worth £4.7bn, as it reported a doubling of pre-tax profit in its latest financial results.

Cala channelled investment from its new owners Patron Capital and Legal & General – which bought the housebuilder in 2013 – over the year to 30 June 2014 to increase its landbank, particularly in the South-east of England.

Cala is targeting turnover of around £0.5bn this year, with turnover set to be boosted by a full year of trading from its southern England luxury developer arm Banner Homes, which it acquired in March 2014.

The firm said it was on course to deliver a three-fold increase in revenue by 2016.

Cala, led by chief executive Alan Brown (pictured), provided no update on the prospect of a potential float on the London stock exchange.

The firm appointed financial advisor Lazard in July to work on a potential initial public offering, but sources told the Financial Times this was unlikely until late in 2015.