Profit at Laing O’Rourke’s largest division slumped by more than half last year, with the firm blaming the impact of covid-19 for the fall.

The divisional performances of the £2.5bn business are now emerging and the results for its biggest, Laing O’Rourke plc, show that pre-tax profit fell to £4.9m from £10.5m in the 12 months to March 2021 having previously dropped two-thirds from the £32.7m it posted in the year to March 2019. Revenue was down 8% to £1.5bn. 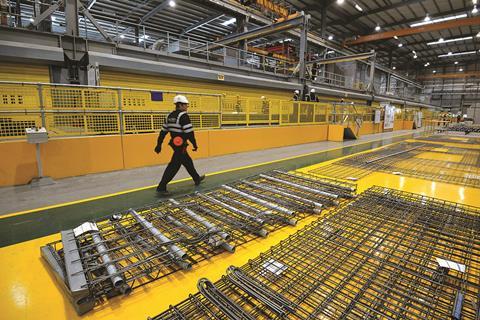 In its accounts, filed last week at Companies House, the firm said it had “made continued progress towards delivery of its strategic targets” with the group’s net cash position improving by £72m to £97m and the firm completing a refinancing.

In the accounts, Laing O’Rourke plc said its underlying performance had been affected by the impact of the pandemic with four city centre jobs all put on hold.

The firm has been forced to shoulder a £14.1m increase in costs on one of these schemes, it added. It did not name the job but it is understood to be the Edinburgh St James Quarter retail scheme in the middle of the city with sites in Scotland enduring a tougher lockdown than those south of the border.

The accounts show it was not hit by any exceptional items during the period although it said the costs on a disastrous PFI hospital contract in Canada had edged up again – by £5.5m to a cumulative figure of £214m.

Laing O’Rourke plc was also handed a £7.2m R&D tax credit while it raked in a profit of £2.5m on selling its stake in the Yorkshire Learning Partnership joint venture, a consortium set up to build seven schools in North and West Yorkshire under the PFI initiative.

In the firm’s group accounts published last month, Laing O’Rourke said revenue in the year to March 2021 edged up 2% to £2.5bn although pre-tax profit slipped 9% to £41.4m.