Profit at Byrne Group slipped last year as the firm said the impact of covid-19 and a redundancy programme hit its bottom line.

The firm, which includes the Byrne Bros concrete arm and its building and fit-out business Ellmer, said it spent £1.6m on restructuring costs in 2020 on top of the £593,000 it shelled out the year before. 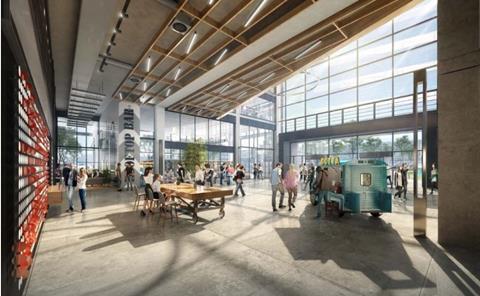 Byrne is carrying out piling, groundworks and concrete frame packages at this job for Santander in Milton Keynes

Pre-tax profit before exceptional items was £5.8m, down from £7m last time, with statutory pre-tax profit off 15% to £5.2m, with this figure including nearly £886,000 it received in furlough money under the government’s Coronavirus Job Retention Scheme..

The average number of monthly staff at the business during the year to June 2020 dropped from 366 to 332.

Byrne, which has been owned by South African builder Wilson Bayly Holmes-Ovcon since 2017, said it was forced to stop work on several sites last year because of the pandemic with turnover falling 8% to £187m.

Schemes the firm’s concrete business is working on include the Google headquarters at King’s Cross and a new office building for Spanish banking giant Santander in Milton Keynes.

Ellmer is also working on the Google job, building offsite washrooms for the US tech firm’s offices, as well as carrying out work on the new £230m Marylebone Lane hotel which has involved turning a former car park on Welbeck Street into a boutique hotel.