In a statement, the firm said: “During the second half of the year, there was increased volatility in the number of site visits, reservations and completions, and elevated cancellation rates as customers continued to cite concerns over political and economic uncertainty stemming from Brexit.”

The number of completions was down 4% to 2,912 while chief executive Peter Truscott, who joined from Galliford Try last year, said it had carried out a rejig of its business to improve efficiency.

He admitted: “Currently, we are inconsistent with many aspects of our operations, often doing things differently from site to site and from one division to another.

“This has led to higher build costs than necessary, inconsistent quality and delivery, excessive overheads and selling costs, and inefficient use of working capital.”

It blamed the fall on £17m of exceptional costs to do with land that will no longer be developed. It also said this figure included £4m of redundancy costs and £6m in consultants fees following a strategic review it launched in September 2018. 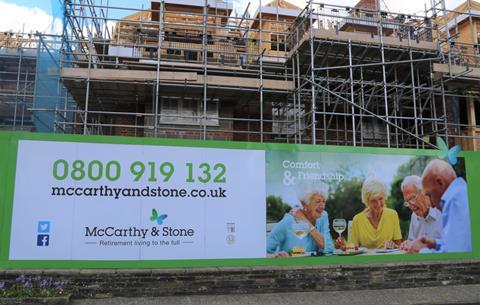 McCarthy & Stone was hit by £17m of exceptional items