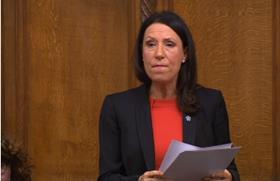 A bill proposing the mandated use of project bank accounts on public sector projects has been given the OK for a second reading.

The 10-minute rule bill, which was brought forward by Labour MP Debbie Abrahams (pictured) on the first anniversary of Carillion’s collapse, is scheduled to be heard again on 1 March.

The Oldham East and Saddleworth MP’s bill proposes all payments on government and public authority contracts worth more than £500,000 be made through a ‘project bank account’ system, ensuring small businesses are paid on time and protected from contractor insolvency higher up the supply chain.

Addressing the House of Commons ahead of this afternoon’s vote on Theresa May’s Brexit Plan, Abrahams said: “It’s exactly a year ago today since the construction giant Carillion announced it was going into liquidation. At the time there was widespread concern about what this would mean for the completion of major public sector projects already underway.

“But there were also worries for the 30,000 or so small businesses, which as part of Carillion’s supply chain, were also working on these projects.

“After Carillion’s collapse thousands of these subcontractors lost major contracts and were left reeling with substantial debts.”

Abrahams told MPs the story of a subcontractor from within her constituency, Neil Skinner, whose joinery business Johnson Bros, was owed £176,000, or more than 15% of its annual turnover, by Carillion when it went bust.

Abrahams said: “Neil told me: ’Carillion often went over 60 days before they paid me, and I had to do a lot of chasing for that’.”

She also revealed that Carillion had imposed a 15% non-negotiable discount on all work carried out by Skinner’s firm saying if these terms were not accepted all unpaid invoices would be sent back to their quantity surveyors’ department.

According to Abrahams, Skinner said: “We reluctantly signed this contract and then they went bust the Monday after signing and 10 days before the first part-payment was due.”