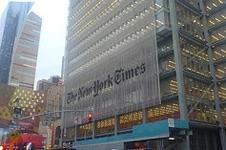 Dozens of ceramic rods have been removed from the cladding of Renzo Piano’s New York Times skyscraper after three people attempted to climb it in five weeks.

The 52-storey skyscraper has proved to be a magnet for daredevils who are easily able to climb the building using the ceramic rods on its exterior.

Alain Robert, a French climber known as the Spiderman, was the first to scale the building in June, followed by Renaldo Clarke from Brooklyn. The third ascendant was David Malone, who last week climbed up 11 storeys to hang a banner over Eighth Avenue.

Following the third stunt, Piano and the developer have acted to prevent further climbing antics. Several of the ceramic rods were removed on Wednesday, and the New York Times has reported that permanent glass panels will be installed so that potential spidermen cannot use the building’s canopies as footholds.

Bernard Plattner, a partner at Renzo Piano Building Workshop, said: “We decided to remove a limited number of rods in the lower part. This is the only immediate possible way to reduce accessibility. The permanent solution is about to be worked out and will not affect the building’s aesthetic.”

Although the rods act as natural shading for the building, Plattner denied that the temperature would rise due to their removal.