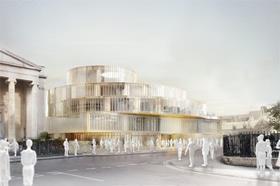 A new fly-though of a prestigious Oxford university scheme designed by Swiss Herzog & de Meuron has been released.

The Blavatnik School of Government project – which had faced local opposition because of its effect on the neighbouring St Paul’s Church and its surrounding area – won planning permission last week.

It is now set to be built by Laing O’Rourke under a £30m contract with work expected to commence shortly.

The six-storey building is due to house a faculty aiming to train future world leaders.

Funded by Russian-American billionaire Leonard Blavatnik, it will be built on Walton Street in the Radcliffe Observatory Quarter, which has been masterplanned by Uruguayan architect Rafael Vinoly.

The building’s stacked, semi-circular design is said to pay homage to the city skyline.