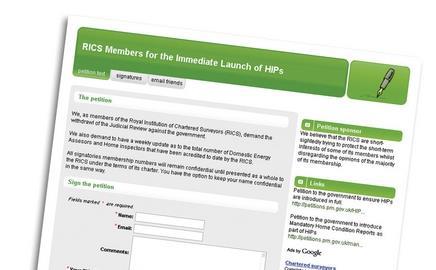 A petition calling for the RICS to withdraw its proposal for a judicial review of home information packs (Hips) has been launched by a group of its members.

The members are incensed at what they see as a lack of consultation by the institution. Margaret Grafham, a partner at SSH chartered surveyors in Liverpool, is one of the members involved in the petition. She said: “Never in the history of the RICS has a judicial review been launched, and we were not consulted.

“The decision was made by a small group of people who did not think it was important to check with the other members. A review like this could cost us half a million pounds.”

The accusation is ironic as the application for judicial review was made on the grounds that the communities department had failed to consult sufficiently before introducing Hips.

The group wants the RICS to withdraw the application for a judicial review so that Hips can be introduced.

The group, made up of individuals from about six surveying firms, launched the petition, RICS Members for the Immediate Launch of HIPs, last Friday.

A spokesperson for the group said it expected to have gained more than 300 signatures by the end of the week. If 1%, or 200 members, of the residential faculty of the RICS sign up, the group will have the power to call an emergency general meeting.

The RICS rejected the accusation that it failed to consult. It said: “Proper consultation with RICS members was conducted in accordance with RICS’ governance structures.”

Following the preliminary findings of the judicial review the government decided to delay the introduction of Hips by two months to 1 August, and then to limit its use to houses with four bedrooms or more.

The RICS said that the main reason for the government’s decision was the lack of domestic energy assessors to provide a workable scheme from 1 June. It added: “RICS did not know about, and was not invited to agree, to the postponement of Hips

The two senior officials in charge of implementing Hips have been taken off the project and replaced by the communities department’s top civil servant.

In an email sent on Monday, and seen by Building, Peter Housden, the permanent secretary, said the furore had caused “delivery and reputational risks” and that he had put himself in charge.

He told staff that Richard McCarthy, the department’s director-general and Neil McDonald, the director, would no longer run the Hips programme. McCarthy will look at “a wider range of issues”, according to the memo, while McDonald becomes planning policy director.

McDonald has effectively swapped jobs with Colin Byrne, who was working on the planning white paper, and will take up the day-to-day running of the Hips programme, while Housden will be its “senior responsible owner”. McCarthy and McDonald will continue to offer advice and undertake specific projects for the programme.

Housden warned staff: “The circumstances that led to the necessity for this revised timescale expose us to a number of significant delivery and reputational risks.”

Roger Humber, strategic policy adviser at the House Builders Association, ridiculed the notion that these risks could be avoided. He said: “The delivery and reputational risks have only just begun. How do you define a four-bedroom house? Many sellers will just say they have three bedrooms and one study.”

To see the petition go to RICS petition