Roof on late Spurs stadium only started a year ago

Mace says roof will be ‘substantially complete’ by the end of the month, as finishing schedule and opening date remain uncertain

Mace has said it was unable to start work on 40% of the new Spurs stadium until less than a year ago because of the design of the roof.

The firm broke its silence last week over its problems on the late-running job, blaming faulty wiring for busting its opening deadline.

Chief executive Mark Reynolds, who has visited the ground every week since the company was handed the keys to the site last May, said: “Issues with critical safety systems were identified. This is linked to the fire detection contractor encountering higher than usual electrical wiring faults.”

Reynolds told Building that the roof would “be substantially complete by the end of August” but said, because it was a cable net roof, “it require[d] all of the structure to be completed in order to begin the roof”, adding that this meant “40% of the stadium construction was [only] able to commence less than 12 months ago”.

Building understands that the second-placed bidder on the job, Multiplex, proposed using an alternative cantilever design that sources have said would have lopped three months off the construction programme – after it estimated the original proposal for a cable net design would mean a completion date of December 2018.

Multiplex declined to comment, while a spokesperson for Tottenham Hotspur football club said the original bidding process was “commercially sensitive and therefore we would not be in a position to comment publicly on such matters”. 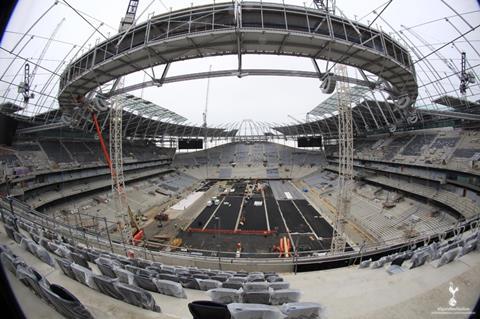 How the site looked in early June this year

Mace won the job in 2015 but was only able to take over the whole site last May, the day after Spurs played its final game at its White Hart Lane ground against Manchester United. Birmingham contractor DSM Demolition then moved in the following day to start tearing down Tottenham’s historic home.

This gave Mace, which is carrying out the job under a construction management contract, just over 15 months to complete the job. Asked whether the August deadline had ever been achievable, Reynolds would only say: “We’ve always worked hard to achieve the quickest possible programme for the project. Mace and Tottenham have achieved a huge amount to date.”

Reynolds said he was taking a “proactive role” on the scheme as thousands of workers battle to get the 62,000-capacity venue complete and that he was now overseeing the delivery of the stadium, working alongside the firm’s project director Graham Barter.

No opening date has yet been given, with the club only saying its Premier League game against reigning champions Manchester City on 28 October was in doubt for the new ground.

Last week Building reported the contractor and club had held crunch talks about when the stadium would be ready, with Tottenham now expected to spell out an amended timetable for completion after its next board meeting, which is scheduled for next week.

Spurs also declined to comment on how long it had booked out its temporary home, Wembley stadium, for – although games due to be played up to and including 14 October at the new Spurs ground have been moved there.

The stadium was supposed to open in time to host the club’s inaugural Premier League game against Liverpool on 15 September. But the delay meant Spurs has had to cancel two test events at its ground, which were due to be held on the recent August bank holiday, as well as a game this Saturday (1 September).

High-profile home league fixtures for the club later in the season include a home game against Chelsea on 24 November and a game against Manchester United on 12 January. The north London derby against Arsenal is scheduled for 2 March next year.

Some bookmakers have stopped taking bets on Tottenham not playing at its new ground at all before the season ends in May, with Paddy Power saying it had suspended the market after being “bombarded by phone bets” in “the north London area”. 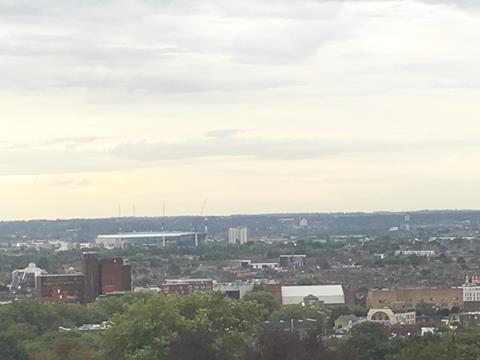