Ecobuild latest: A proposal to turn Silvertown Dock into a new type of marina has won a competition aimed at coming up with idea to transform the Royal Docks in east london

The winnning scheme, designed by Bethany Gale and Sarah Tolley, was announced at Ecobuild this week.

Their Silvertown DockY proposal was picked as the most imaginative and “water-sensitive” idea to transform the world’s largest enclosed docks.

It was chosen from over 65 entries and proposes transforming the former graving dock for shipbuilding into a vibrant series of spaces that encourage sport, leisure and wildlife preservation.

Second prize was awarded to E16 6BL by Arup, a masterplan to create a technology hub around London City Airport.

The competition was run by the Landscape Institute and Ecobuild, with support from the Mayor of London, London Borough of Newham and Open-City. 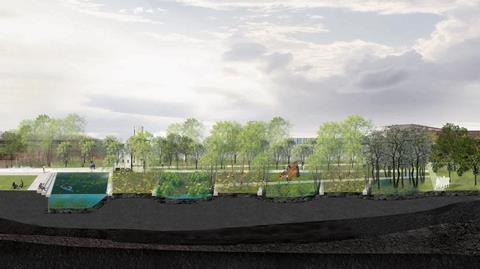