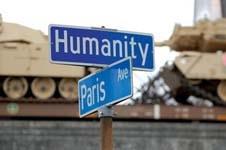 Royal Haskoning, a consulting architecture and engineering firm, has been appointed by the US Army Corps of Engineers and New Orleans Flood Protection Alliance to calculate flooding risks for New Orleans.

The contract, aimed at damage limitation in the event of flooding, will contribute to the city's future safety. The firm will also investigate the effectiveness of compartmentalisation of the Orleans Metro Polder.

Royal Haskoning has been working with the US Army Corps of Engineers for the past two years on the reconstruction of New Orleans, following the devastation brought by Hurricane Katrina in 2005.

Under the new contract, the consultant will study the use of existing raised railway lines in the city, and their potential to act as inner dykes. In the event of a dyke failure, these could ensure that the entire polder does not end up in water.

Computer flooding models developed by Delft University of Technology are being used to calculate flooding risks, with the first results for scouting calculations scheduled for the end of October.

Project manager Mathijs van Ledden said: “Royal Haskoning has been working to rebuild and improve the safety of New Orleans since the Hurricane Katrina disaster in 2005. This new task is aimed at limiting the damage should any future hurricanes hit and ensuring the city is well equipped to handle the impact.”