Infrastructure work on York Central to start next year

Homes England and Network Rail have agreed to invest £77m into a scheme that is promising more than 3,000 homes for the middle of York.

The money will be used for infrastructure work at the York Central project which has been masterplanned by Allies and Morrison and Arup. 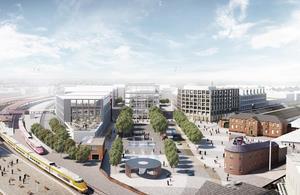 How the planned scheme will look when completed

The work will redevelop a 45ha swathe of the city with up to 3,075 homes, new commercial and retail space and the expansion of the National Railway Museum.

Last summer, the Ministry of Housing said the scheme – approved in principle by York council last March – would not face a planning inquiry because then communities secretary James Brokenshire did not believe the move was necessary.

The proposals, which have been in development for five years, have been drawn up for York Central Partnership – a collaboration between Homes England, Network Rail, the City of York council and the National Railway Museum.

The plans also include the creation of new hotels, improved cycling access, a public park, and a new western concourse for York railway station.

Homes England interim chair Simon Dudley said: “This investment is a clear signal of the government’s commitment to levelling up across the country by providing much needed homes and employment space in York. The confirmation of funding provides that market with some much-needed certainty around a major strategic site at a time when it is planning ahead to recover from the [covid-19] pandemic.”

The £77m will help fund a number of civils jobs including building a bridge over the East Coast mainline railway with work set to start next year.

A reserved matters planning application for the first phase has already been submitted to the council and, as well as the bridge, this includes a new main road entrance to the development site along with improving existing drainage systems and building new ones.