The civil servant formerly responsible for fire safety guidance “forgot” to clarify that ACM cladding was not permitted despite a request from industry experts.

Brian Martin told yesterday’s hearing of the Grenfell Inquiry that he had “put it to one side and waited for [the experts] to contact me” because it had been a “busy time”.

He also admitted that he had “completely underestimated” the hazard posed by ACM panels despite being warned that an ambiguous passage in official guidance could be interpreted as permitting their use.

Martin had attended a meeting of fire safety professionals organised by the Centre for Window and Cladding Technology (CWCT) in July 2014 following a series of major cladding fires in the Middle East which had been caused by ACM.

The inquiry has already heard that the passage in Approved Document B, the part of the building regulations dealing with fire safety, stated that “filler” materials needed to obtain the tough fire rating of ‘limited combustibility’. 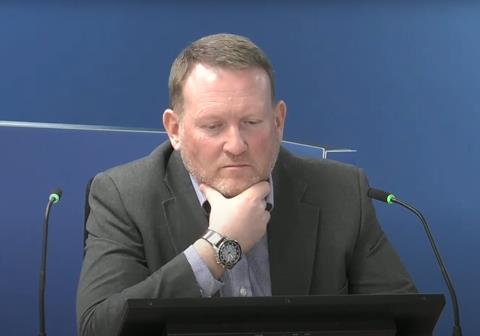 Martin admitted on Tuesday that the word ‘filler’ had been a last-minute addition to the guidance and had not been consulted on with the construction industry.

It was also contained in a passage titled ‘Insulation materials/Products’, leading many in the industry to believe that the word only referred to insulation products and not to cladding panels.

Martin has claimed that the scope of the word included the combustible cores of cladding panels, like the plastic cores of ACM, and it was used deliberately to encourage designers and building control bodies to think “broadly” about what products were compliant.

But minutes from Martin’s meeting with the CWCT show that it was agreed that it was “not clear” that the guidance prohibited the use of ACM because of how it was worded. It was also agreed that clarification could be achieved by publishing a ‘frequently asked questions’ (FAQ) for this section of Approved Document B.

No FAQ on the passage was ever published and ACM was only explicitly banned by the government in December 2018, a year and a half after the Grenfell Tower fire which claimed 72 lives. The inquiry has found that ACM was the “primary cause” of the rapid spread of flame up the sides of the tower in June 2017.

Asked by counsel to the inquiry Richard Millett QC why the FAQ was not published, Martin said that he had decided to “wait for [the experts at the meeting] to contact me with what they were proposing”.

“Why would it be up to them to contact you with what they were proposing, given that, having read the minute, you knew what the problem was and you were the one with, as it were, a finger on the planning portal button and could put the FAQ section in?” Millett asked.

“I think I thought it would be better for a group of fire safety experts and cladding experts to draft something and for us then to look at it,” Martin said, adding that he “understood” that that was what the attendees of the meeting would do.

Asked why he had not contacted them when no proposals for an FAQ were sent, Martin said: “I think this was a busy time for us and I think I probably forgot about it is the honest answer. I think I’d put it to one side and waited for them to contact me and then focused on the other work that I was doing.”

Martin’s colleagues, Anthony Burd, Bob Ledsome and Richard Harral have all told the inquiry that issuing the FAQ was not a difficult piece of work and could have easily been done by the fire safety team in the housing department.

Martin accepted yesterday that there was nothing “unreasonable or inappropriate or disproportionately difficult” in publishing the FAQ. “It certainly wasn’t impossible. I mean, it would have taken some work, but yes,” he said.

Asked if the reason he had done nothing to clarify the passage was because he did not consider there was any risk of a major fire in England and Wales due to the use of ACM panels, he admitted that he “completely underestimated the hazard”.

He added: “I underestimated the risk that ACM presented. I think if I’d fully understood it, I may have put more time into this issue.”

He also said he had not raised the lack of clarity in the guidance on ACM with any other senior official at the time, admitting: “I don’t think I recognised how serious it was. It was a problem which was really peculiar to ACM, and I just didn’t think it was that significant an issue at the time.”

Martin was also asked yesterday about an email exchange, in the same month as his meeting with the CWCT, about the use of combustible insulation within cladding systems.

In the emails, Martin was told by building control body the National House Building Council that Kingspan’s K15 insulation was being used in high-rise projects on the basis of a certificate from the British Board of Agrement.

The inquiry has heard that Martin did not investigate how widespread the problem was and did not issue warnings to other organisations.

“Were you not interested to know, if it was a problem, how big the problem was, even at that stage, pending Kingspan coming up with their tests that would cure it all?” Millett asked.

“It seems like a reasonable question to ask,” Martin replied. “But we didn’t think of it at the time. I don’t know why.”

“Is it because it was just unthinkable, and you had the makings here of a crisis on your hands that you simply couldn’t conceive of?” Millett asked.

Martin said: “I don’t think it was that.”