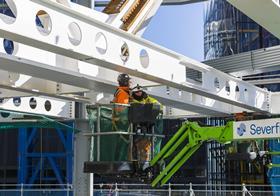 Steelwork contractor Severfield said it has finally drawn a line under the row over who is responsible for the cost of replacing bolts on the Cheesegrater.

The dispute arose when three steel bolts fell off the Richard Rogers-designed building in the City of London at the end of 2014.

Since then Severfield, main contractor Laing O’Rourke and engineer Arup have been mired in talks about who should foot the bill for the work to replace all 3,000 bolts on the 225m-tall tower.

Severfield completed the work at the end of 2017 leaving it nursing a £6m bill and last year chief executive Alan Dunsmore told Building he was getting exasperated at the time it was taking to sort out. “The argument is still dragging on. Lots of different lawyers are involved.”

The Cheesegrater was one of a number of problem jobs which forced the firm to launch a £45m rights issue in 2013 after posting a near £20m loss. Half that amount related to the job at 122 Leadenhall.

But in trading update this morning, the firm said: “Following extensive negotiations with all stakeholders, we have now agreed a final settlement for the remedial bolt replacement works at Leadenhall, resulting in no further costs for the Group.”

The firm said current trading was in line with expectations, which it has previously said will see it hit a profit of £26m by next year.

Its £274m order book also included the first schemes won by a new business it has set up in the Netherlands. It added that its workloads at its India business, where it carries out work with local firm JSW, were also on the rise to stand at £149m on 1 April.

Severfield will release its results for the year to 31 March 2019 on 19 June.