Severfield says it is on track to hit 2020 profit target

Steelwork contractor Severfield said it is on track to double profits by 2020 after the firm posted an improved set of numbers in its half year results.

The firm, which is working on the 22 Bishopsgate tower (pictured) in the City of London as well as Tottenham Hotspur’s late-running stadium in north London, said pre-tax profit was up 14% to £13.1m with revenue up 9% to £149.1m in the six months to the end of September.

Severfield wants to double underlying pre-tax profit to £26m by 2020 and in its interim results the firm said operating margins of 8.4% – down from the 9.3% recorded in the equivalent period in 2017 – were “firmly within the margin range of 8 to 10 per cent required to achieve our strategic profit target”.

The firm, which is headed by chief executive Alan Dunsmore, said it expected to start work on a £50m contract to put up steel at the Google headquarters building in King’s Cross, north London, which is being built by Lendlease, in the second half of its financial year.

Its UK order stood at £230m as of 1 November which it said “continues to include a high proportion of smaller projects, particularly in the industrial and distribution sector”.

It said the UK market was “stable” and added: “We have seen no material impact from Brexit, however with continued uncertainty, we are scenario-planning.”

It added that it saw “good opportunities across the commercial office, industrial and distribution, data centre and infrastructure sectors” – where it was won schemes at Heathrow and Manchester airports. 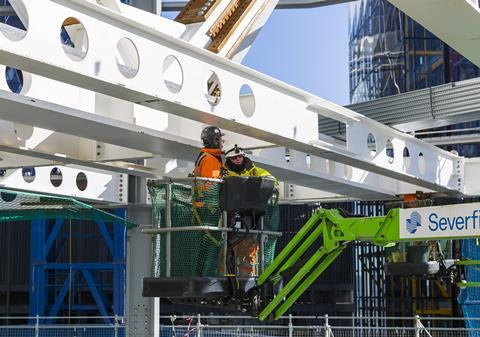