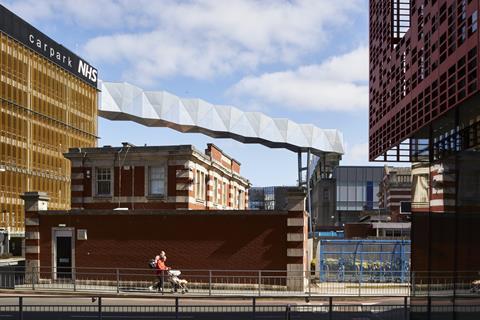 Sheppard Robson has completed a 130m long cranked bridge that will allow critically ill and injured patients to be flown by helicopter directly to Manchester’s city centre hospitals.

Suspended 18m above the ground, the “hospital corridor in the sky” runs from a new helipad on the roof of a multi-storey car park straight into Manchester Royal Infirmary. It will also serve neighbouring Royal Manchester Children’s Hospital.

Previously patients had to be airlifted to a nearby park, then transferred to hospital by a normal road ambulance, adding extra minutes and discomfort to situations where every second counts.

The bridge’s longest span is 40m and is clad in stainless steel panels. The material and form were chosen to minimise the impact of the conspicuous addition to the skyline. They will also “animate” the bridge as light conditions change, said Alex Solk, a partner at Sheppard Robson. 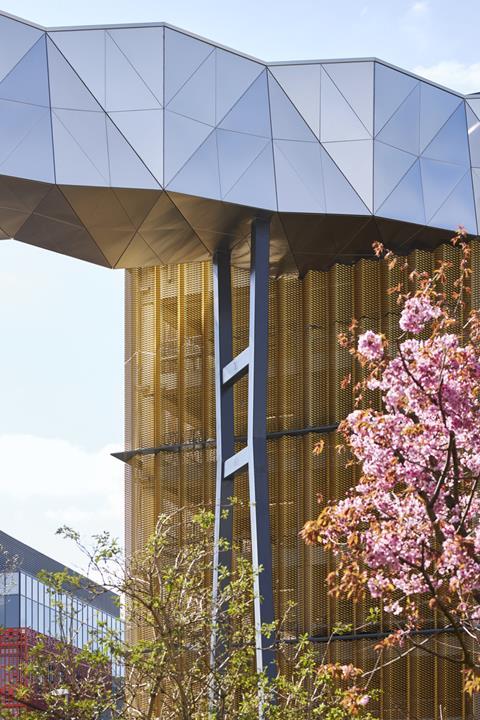 The final design is a result of 13 routes that were tested during the feasibility stage of the project, he said.

The design team had to negotiate a challenging site that included working around the grade II-listed Pankhurst Centre, which ultimately shaped the design of the bridge, and spanning a busy road on the hospital campus.

Other challenges included the fact that they were building the link bridge close to a high dependency ward as well as building on the roof of the high-dependency unit, which remained open throughout. The project was also completed without interruption from covid. 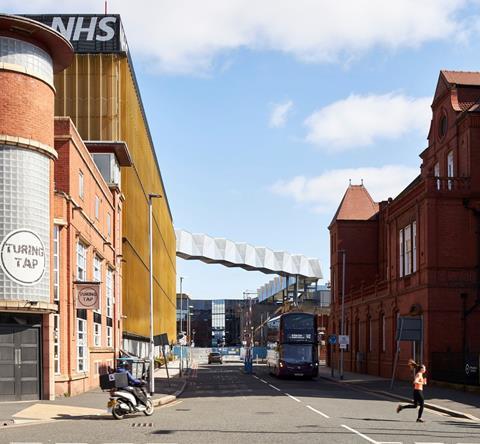 Solk said: “It’s wonderful to see such an important project for Manchester and the wider region complete. We and the trust wanted the design to signify the importance of this life-saving addition to [the hospital trust’’s] Oxford Road campus, hence its striking geometric form. The choice of iridescent, shimmering cladding only serves to heighten this.”

Grafton Street car park was also designed by Sheppard Robson and opened in 2016.

The bridge was developed in partnership with Bruntwood for the Manchester University NHS Foundation Trust.