One of the country’s best-known regional contractors has gone into administration with close to 125 jobs now at risk.

Lincoln-based Simons Group was established in 1944 and is led by chief executive Tom Robinson who was appointed to the post five years ago from Carillion where he spent 21 years, having joined the group when it was known as Tarmac in 1992.

Accountant FRP Advisory was appointed administrator earlier today (Tuesday) and one site source told Building: “We were called into a meeting and told that was it. Everyone was pretty stunned.”

Joint administrator Nathan Jones said: “After a period of challenging trading and contract delays resulted in unsustainable cashflow difficulties, the directors of Simons Group were left with no choice but to enter the business into administration. 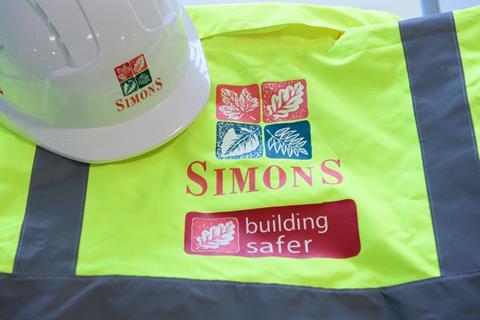 “Our initial focus will now be on working to ensure that any live contracts are transferred across to new contractors with minimal disruption.”

He said FRP would be implementing an orderly wind-down of the construction business “which will unfortunately result in employees being made redundant over the coming days”.

In its last report and accounts for the year to March 2018, Simons Group had a turnover of £105m, returning to the black with a pre-tax profit of £704,000 following a £3.9m pre-tax loss the previous year.

The firm is thought to have run into trouble because of problems with the UK retail market and in a note accompanying its report and accounts filed last June, executive chairman Paul Hodgkinson admitted: “Our core customer group saw their retail market changing very dramatically with high street department stores and standalone shops seeing sales reduce and shifting 24 hour on-line procurement as a preferred way of shopping. We expect this trend to continue.”

He added: “Any [retail projects] that could be delayed, mothballed or sold were; our workload which looked healthy in 2017 did not deliver the expected activity.”

And in his note in the accounts, Robinson said the firm expected “another challenging year given the uncertain macro-economic and political climate”.

In the accounts, the firm said five of its jobs, with a value of £38m, had been delayed into its 2018/19 financial year which ended in March. It added that four of the jobs had been held up by over a year. “This has had an in-year impact on our construction revenue of £29m,” it added.

As well as the group, Simons’ construction, development and design arms have all gone into administration.

Jones added: “We will be looking to market some elements of the business for sale and encourage any interested parties to make contract with the administrators without delay.”

Its construction arm is by far its biggest operation with a turnover in 2018 of £92.5m while its property development business had revenue of £10.1m. Its design business had an income of £1.8m during the same period.

Its last set of accounts showed the firm employed 182 people, down from 2017’s figure of 215 meaning at the time of its administration staff numbers had slipped more than 40%.