Battersea Arts Centre partly reopened on Saturday night for two performances, less than 24 hours after a blaze ripped through the south London venue.

Part of the grade II-listed building had been being rennovated by Belfast-based contractor Gilbert Ash to designs by architect Haworth Tompkins.

In an update on the Arts Centre’s website yesterday, artistic director David Jubb said more than two-thirds of the building had survived, after more than 60 firefighters battled to save it on Friday afternoon.

Jubb said: “I am in awe of my team, the artists and fire brigade, who only 24 hours after the fire, helped to re-open the building, last night, and put on two sold out shows. It was great to have people back in the building.

“Whilst we have lost the Grand Hall, more than two thirds of the building is saved.”

Jubb added that Gilbert Ash’s rennovation work should proceed as planned: “It is early days and there is a huge amount to work through. But we think, at this moment, that the final phase of the capital project, due to be completed in early 2016, should be able to go ahead as planned.

“This is because the parts of building in which this project is happening are unaffected by the fire. This is a huge relief and means that the investment in that phase of the project is safe, good to know if you have donated to that project.”

Everyone escaped the fire safely on Friday, including workers from Gilbert Ash.

People were said to be in tears on the streets as police and paramedics also arrived at the scene.

Smoke billowing from the construction site could be seen across the capital.

Stirling Prize-winning Haworth Tompkins has been working with the arts centre for about 10 years. Work on the third and final stage was underway.

After the smoke had cleared on Satrurday the extent of the damage could be seen, with the entire roof of the old grand hall now lying in ruins on the floor.

The basement of the structure however was unaffected by the fire, mainly due to the thick floor of the grand hall protecting the lower levels from the blaze.

According to contracts database Barbour ABI, the current phase is worth £6m and involves increasing the size of the courtyard, adding a new mezzanine floor to the collection hall, an external staircase to the Grand Hall building and Municipal building, adding PV panels, and other mechanical and electrical and refurbishment work. The job was scheduled to complete this May, according to Barbour. 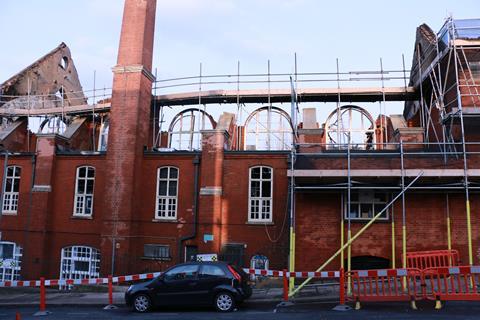 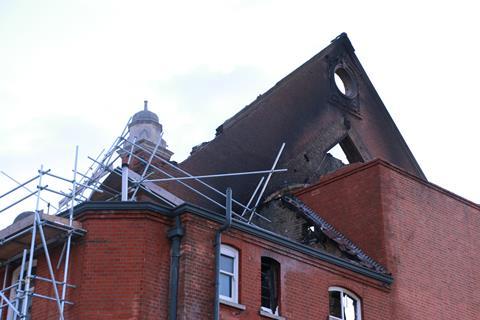