SIG profit slashed by half 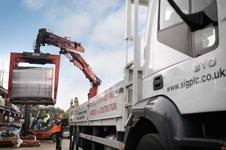 Materials firm SIG saw its total underlying operating profit slashed by over half in 2009, compared with the previous year.

The group said its outlook for 2010 remained challenging in all of its markets. It also blamed extreme cold weather for declines in its business, as deliveries had not been made and construction site activity was inhibited for long periods as a result. The group said it estimated that around £30m of sales had been lost in the first two months of 2010 as a result of bad weather.

Commenting on the results, chairman Les Tench said: “2009 was an exceptionally challenging year for SIG. The scale of the decline varied by geography and market sector, with a number of SIG's mainland European countries of operation less heavily affected than the UK and Ireland.

The extreme cold weather conditions and snow experienced across the UK and mainland Europe in January and February have resulted in a particularly slow start to trading in 2010. It is management's expectation that the shape of the year is now more likely to be significantly more weighted towards the second half and that the pre-tax profit for the first six months will be well below the result for the equivalent period last year.”