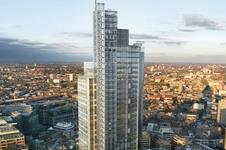 Sir Robert McAlpine is set to grab the contract to build the Heron scheme at the Barbican in London.

The contractor is hotly tipped to beat rival Mace for the 35-storey scheme formerly known as Milton Court, according to two sources close to the situation.

Brookfield and Skanska had also submitted bids, but it is understood that a low price from Sir Robert McAlpine will clinch the deal. The job is believed to have had an original price tag of £190m.

The David Walker Architects-designed scheme contains almost 300 residential apartments above a 625-seat concert hall for the Guildhall School of Music and Drama.

It was put on hold in summer 2008 amid worsening market conditions, and its revival is the latest sign of life in the London development market.

The tower has been scaled back since its original design, with the height reduced by about 28m to 112m amid concerns about views from the South Bank.

It is understood final bids are due in today.

A spokesman for Heron dismissed the reports that Sir Robert McAlpine was set to land the contract as "utter rubbish". He said: "The tender documents have not even been received and won't be reviewed or discussed for at least two weeks. No decision has been taken."